This is my personal list of reasons to love Australia and its people. I always think Australians have a great take on life, they are laid back with a great sense of humour. A great recipe for living! 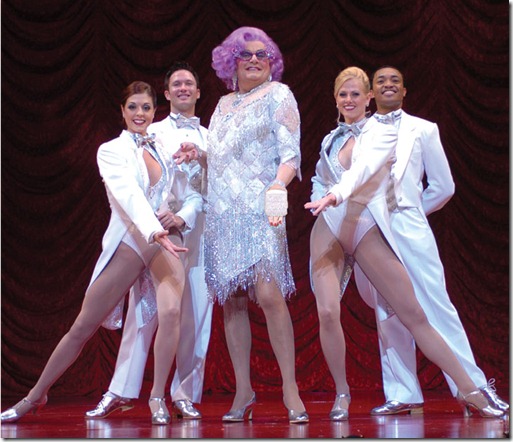 My dad got me into watching the inimitable Barry Humphries. At first I couldn’t understand why he would want to watch some man dressed up as a woman severely challenged in the looks department. It was when he was on chat shows that his genius for comedy really shone through. Definitely a Housewife Megastar and Queen of the Adlib. It’s amazing to watch celebs queuing up to be insulted by Dame Edna, they just can’t get enough of her. I was watching a recording of her on the Graham Norton show and she was talking to a young woman in the audience describing her dress style as “affordable”.  So yes that’s the first reason to love Australia when it produces one of the cleverest and funniest comics of our time. 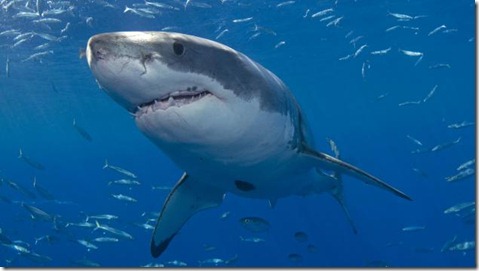 Am I the only person to have cried watching Jaws when they blew up the Great White Shark? I remember being really upset. Sadly that movie has a lot to answer for concerning the welfare of all sharks.  These are truly fish Leviathans. It is wonderful to watch how they elegantly cruise through the water with their little fan clubs of pilot fish. There’s no reason to hate these great predators, in fact they do us a great favour by keeping our oceans healthy. Just as wolves naturally cull deer herds, so the Great White does the same beneath the waves. 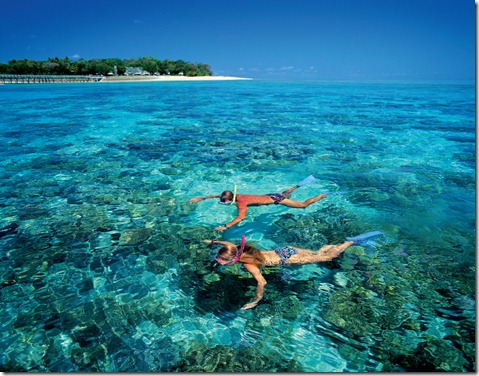 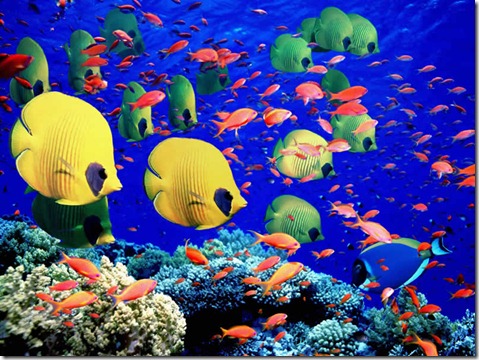 I’ve included two pics of the Great Barrier Reef because I just can’t get enough of it! It’s Nature’s own widescreen tv with the colour saturation turned right up. What an amazing place. As you can see from the first pic you don’t need to be a Free or Scuba diver to explore it. You can puddle along with your snorkel and still take in many wonders. If you swam in around the Reef every day for the rest of your life you still wouldn’t see all the life that lives within it.  Every documentary that comes on about, I’m there front and centre ready to get my heady colour fix! 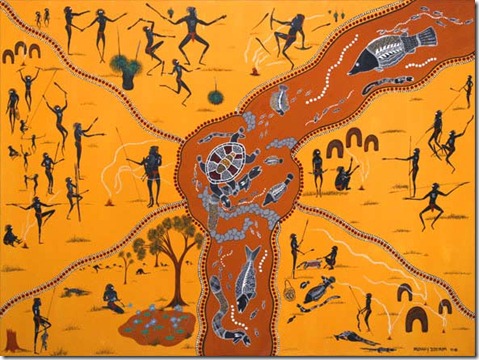 If ever there was a race still in touch with Mother Earth it is the Aborigine. According to their beliefs all life as we live it today including the human and the animal world is part of one huge unchanging web of relationships which can be traced to the great spirit ancestors of the Dreamtime. Today in the Dreaming the events of  Creation are re-enacted in ceremonies and through dancing in mime form. Songs of Creation are chanted whilst accompanied by the didgeridoo or clap sticks.  I love that in this modern and frantic world the Aborigines have never forgotten where they came from. 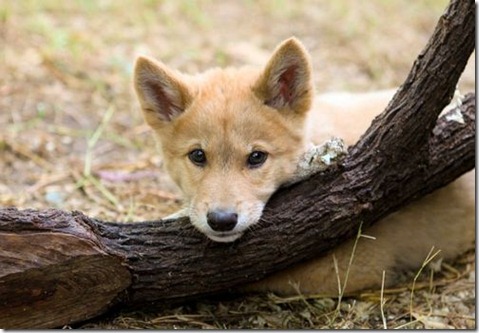 Like the Great White Shark they suffered at the hands of the media, namely in the famous Australian case many years ago where a mother claimed that they had taken her baby.
Also like the Great White Shark they are Nature’s cleaners. As Australia’s largest terrestrial predator they do a fabulous job of keeping the rabbit, kangaroo and rat populations in check. The Dingo was much loved and held a privileged position in the Aboriginal cultures of Australia . Dingoes were also a well known part of ancient rock carvings and cave paintings. And anyway Dingo puppies are cute! 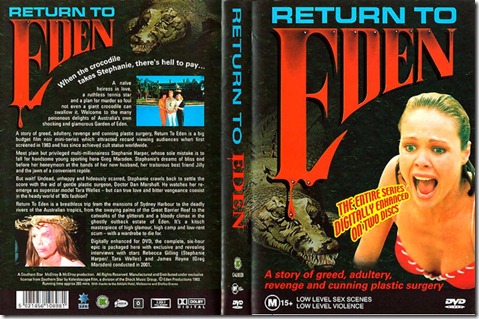 This was a very popular Australian tv series in the 80s. Plot was, scheming evil man marries a plain Jane for her money. Has an affair with her best friend and plots to murder plain Jane by chucking her in crocodile infested waters. Plain Jane survives crocodile mauling and meets good looking plastic surgeon who restores her good looks. In fact she is now so good looking that she becomes Australia’s top fashion model and plots to wreak her own revenge on her evil husband and best friend.
At the time it was quite watchable but what made me really love it was the wit of Terry Wogan. The morning after each episode aired he would broadcast his take on it. I’d just fall about laughing. I think the only thing funnier than that was his Janet & John series of stories, but that’s for another day. 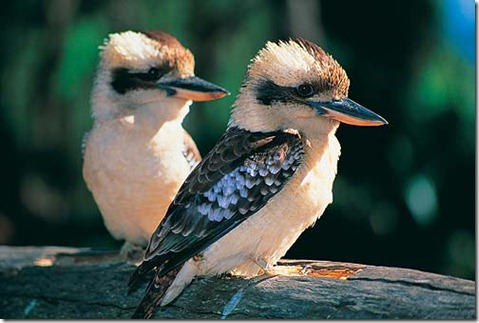 Chosen because they just make me laugh – plain and simple. There is one called Sydney who lives in an aviary near me and I could sit there all day listening to him. Actually they are also a very attractive and intelligent bird. Love them to bits! 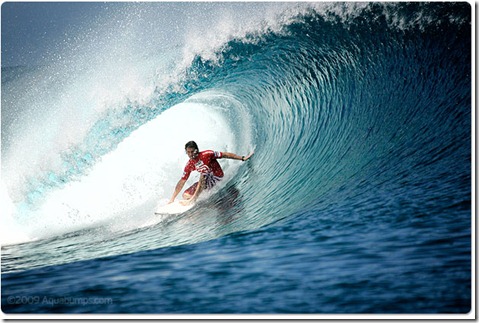 This reason is dedicated to my Dad who loved to surf. It was usually in the cool waters in Whitesand Bay in Cornwall. Nothing kept him away from the beach when surf was up.  He’d surf by day and watch surfing videos in the evening, The Endless Summer being his favourite. He used to salivate over pictures of Australian beaches and one year he finally got to go there. I remember getting a hastily scrawled postcard from Bondi Beach. The excitement vibes oozed from the paper! He’d reached his Nirvana. So it’s because of my Dad that I love to watch Aussie surfers riding the waves and I never tire of it. Probably Point Break is my own fav film.  Surf’s Up Dad! 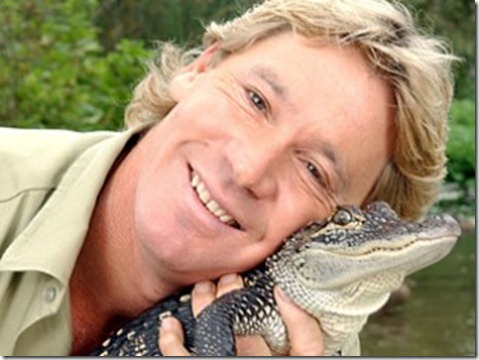 Taken before his time. I love what this wonderful man did for the not so cute wildlife of Australia. If anyone could make you fall in love with a crocodile Steve Irwin could. He had such respect for them. My heart would be in my mouth when watching him go out to rescue one. He’d always be worried about stressing it. It was through him I learned about crocodile mums being one of the most caring of mothers in the animal world. Not something you would associate with a few tons of organic armour plating! I suppose it was Steve’s enthusiasm for life and the animals that radiated up from the depths of his soul that reached out and touched us.
That man packed more into his 44 years on this planet than some twice his age. A great Australian and life model.

Well there you have it, all my reasons, well most of them anyway. Anybody have any other reasons to love Oz?